Summer 1998 – On meaning and computers by John Mohr and John Hall. 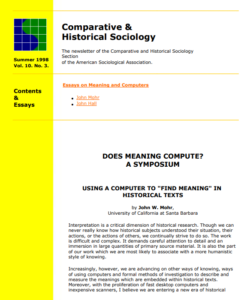 Winter 1998 – Discussion on genocide by Helen Fein and Jack Porter. 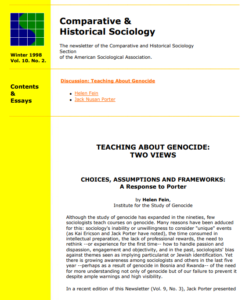 Fall 1997 – Essays on the relationship between feminism and historical sociology by Julia Adams and Ava Baron. 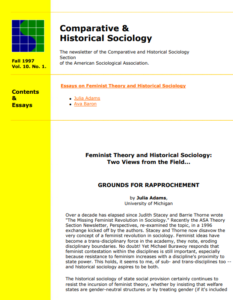 Summer 1999 – Essays by Mounira M. Charrad on “Bringing in Tribe,” and by Beverly J. Silver on “Comparing Hegemonic Transitions.” 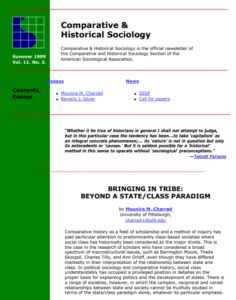 Winter 1999 – Essays by John Boli on “Global Historical Comparative Research,” and Francesca Guerra-Pearson on “Measuring the Meaning of Charitable Organizations.” 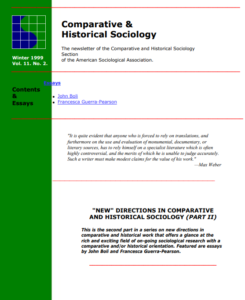 Fall 1998 – Essays by Edward Tiryakian on “From LePlay to Today,” and by Mustafa Emirbayer and Mimi Sheller on “Studying Publics in History;” From the Chair on “New Social Forms in World Society” by David Stark. 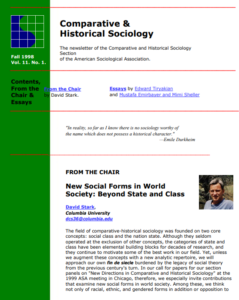 Summer 2000 – Symposium of Jeffery Paige’s Coffee and Power, with a review essay by Roland Robertson and a reply by the author. 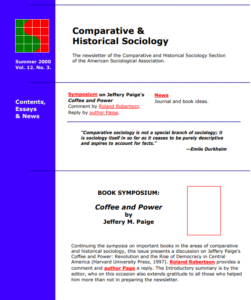 Winter 2000 – Essay by John Torpey on “The Past as Political Project.” 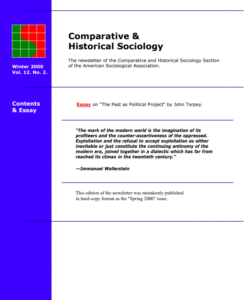 Fall 1999 – Symposium on The People’s Lobby by Lis Clemens (reviews by Jason Kaufman and Pamela Walters); “From the Chair” by Ewa Morawska; ASA didactic seminar on Comparative Sociology by Jack Goldstone. 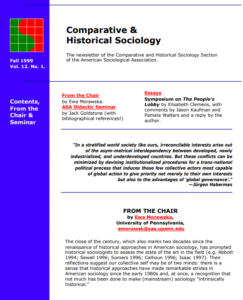 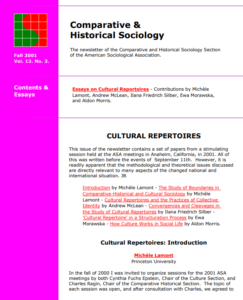 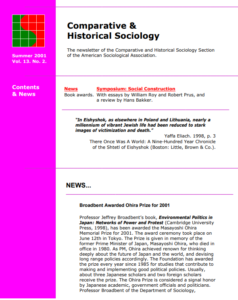 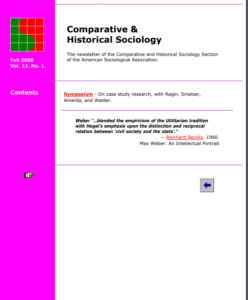 Summer 2002 – Includes a memorial for our dear colleague Roger V. Gould; and various essays in comparative and historical sociology.

Spring 2002 – Features papers by Stephen Turner and Robert Marsh on Weber; by François Dépelteau on the sociological imagination; and info on the 2002 Barrington Moore Award.

Spring 2004 – Essays by Julia Adams, Randall Collins, and David Zaret on Philip Gorski’s book on the state, with a reponse by the author.

Spring 2003 – Includes a From the Chair; Commentaries on Richard Lachmann’s award-winning book, Capitalists in Spite of Themselves; and more!

Spring 2007 – A book symposium on Vivek Chibber’s Locked in Place, an “author meets author meets author” feature with William Sewell, Jr., Arthur Stinchcombe, and Charles Tilly, and our ever-popular “Identities” series, in which Amy Kate Bailey (last year’s graduate student article award winner), Rebecca Emigh, and Richard Lachmann reflect on why and how they entered CHS, and what it means to them.

Fall 2006 – A note on the job market and a message from the chair. Contributions by William Roy, Nicola Beisel, Julian Go, and others.

Note: Beginning with Volume 19, the Comparative Historical Section Newsletter is now known as “Trajectories.” Thanks to Dan Slater for suggesting the new name!

Spring 2008 – A note on archival research and a book symposium on George Steinmetz’s The Devil’s Handwriting.

Fall 2008 – Contains a message from the chair on “Past and Present”, “Remembering Charles Tilly” and an interview with Isaac Martin, etc.

Spring 2010 – Contains reports of new research on corruption and regulation in the economic sphere, “Author Meets Critics” discussions of new books by Mabel Berezin and Jeffrey Haydu, and “Identities” essays by King-To Yeung and Joya Misra.

Fall 2009 – Contains a message from the chair, a remembrance of Giovanni Arrighi, a report on the 2009 Comparative-Historical Mini-Conference, “Author Meets Critics” discussions of new books by Rebecca Emigh, Paul McLean, and John Hall, and an “Identities” reflection by Henning Hillman.

Spring 2011 – Contains reflections from Morocco on the Arab Spring by Jonathan Wyrtzen; a book symposium on Margaret R. Somers’ Genealogies of Citizenship: Markets, Statelessness, and the Right to Have Rights, with contributions from Erik Olin Wright, Saskia Sassen, and Michael C. Tolley, as well as a response from Somers; and a discussion between Saïd Amir Arjomand, James Mahoney, and Immanuel Wallerstein on the question, “What happened to the ‘comparative’ in comparative and historical sociology?”

Fall 2010 – Contains a message from the chair, a methodological symposium (with essays by Katherine Stovel, Paul McLean, and Scott Boorman), and a letter from Erik Olin Wright discussing the 2012 ASA theme.

Spring 2012 (supplement) (Edited by Ates Altinordu and Seio Nakajima) – Contains information on the 2012 ASA meeting in Denver and other miscellaneous information.

Spring 2012 (Edited by Ates Altinordu and Seio Nakajima) – Contains a book symposium on Greta R. Krippner’s Capitalizing on Crisis: the Political Origins of the Rise of Finance, with contributions from Frank Dobbin, Isaac Martin, and William H. Sewell, Jr., as well as a response from Krippner; and a book symposium on James Mahoney’s Colonialism and Postcolonial Development: Spanish America in Comparative Perspective, with contributions from Mara Loveman, Nitsan Chorev, Richard Lachmann, and Dan Slater, as well as a response from Mahoney.

Fall 2011 (Edited by Emily Erikson and Isaac Reed) – Contains a message from the chair, a letter from Edward A. Tiryakian, and the results of a survey of section members.

Summer 2013 (Edited by Ates Altinordu and Seio Nakajima) – Contains a book symposium on Isaac Ariail Reed’s Interpretation and Social Knowledge: On the Use of Theory in the Human Sciences (University of Chicago Press, 2011).

Spring 2014 (Edited by Matthew Baltz) — Contains information on the upcoming ASA annual meeting in San Francisco, a comment on current events in Ukraine and Venezuela by Tim Gill, a preview of The United States in Decline edited by Richard Lachmann, and a listing of recent PhDs on the job market.

Fall 2013 (Edited by Ates Altinordu and Seio Nakajima) — Contains a letter from the chair and a book symposium on Andreas Glaeser’s Political Epistemics: The Secret Police, the Opposition, and the End of East German Socialism (University of Chicago Press, 2011).

Fall 2014 (Edited by Matthew Baltz) — Contains a letter from the chair Bruce Carruthers; book symposia on The Fracturing of the American Corporate Elite (with contributions from Mark Mizruchi, William G. Roy, Judith Stepan-Norris, Anthony Chen, and Bruce Carruthers), The Land of Too Much (Monica Prasad, Greta Krippner and Elisabeth Clemens), The Emergence of Organizations and Markets (Walter W. Powell, John F. Padgett, James Mahoney, Katherine Stovel, and Brayden King), and Waves of War (Andreas Wimmer, Jack Goldstone, and Mabel Berezin); an essay from Theda Skocpol Dissertation Award Winner Sahan Savas Karatasli; a conference report from John Torpey; a report on the section’s recent ASA joint mentoring event by Nicholas Wilson; and a listing of new publications, announcements, and PhDs on the market.

Winter 2016 (Edited by Matt Baltz) This issue features a discussion with George Steinmetz, Mathieu Deflem, Greta Krippner, and Monica Prasad on whether adopting a policy orientation in scholarship is a good idea; a book symposium on Jake Rosenfeld’s What Unions No Longer Do with comments from Arne Kalleberg, Kim Voss and Evelyn Nakano Glenn as well as a reply from Rosenfeld; a Policy Brief by Dorit Geva on US Selective Service Reform; and section news and announcements.

Summer 2016 (Edited by Matt Baltz) This issue features a concluding essay on this year’s theme from our outgoing chair, Monica Prasad, “Can Saving the World Save Comparative Historical Sociology?” ; an author-meets-critics session on Dorit Geva’s Conscription, the Family, and the Modern State, with comments from Myra Marx Ferree, Cedric de Leon, and Eileen McDonagh and a reply from Dorit Geva; an essay by Despina Lalaki, “The Cradle of Democracy and the Longue Durée of a Crisis: Some Thoughts from the Perspective of Historical Sociology”; a comment from Xue Li and Alexander Hicks on the spread of the nation state across the world; and an announcement of section awards and election results.

Fall 2016 (Edited by Matt Baltz, Marilyn Grell-Brisk, Victoria Reyes, Yibing Shen) This issue features a letter from our new chair, Kim Voss; a book symposium on Jonathan Wyrtzen’s Making Morocco (Cornell University Press) with comments from George Steinmetz, Julian Go, Mary Lewis, Mounira Maya Charrad, and a reply from Johnathan Wyrtzen; a book symposium on Caroline Lee’s Do-it-Yourself Democracy (Oxford University Press) with comments from Lyn Spillman, Margaret O’Mara, Philip Lewin, William Hoynes, and a reply from Caroline Lee; a book symposium on Martin Ruef’s Between Slavery and Capitalism (Princeton University Press) with comments from Tera Hunter, Amy Kate Bailey, and a reply from Martin Ruef; an op-ed corner on “Understanding Trump’s Election” organized by Victoria Reyes and with contributions from Barry Eidlin, Marcus Anthony Hunter, and Stephanie Mudge; an Identities essay by Harold Kerbo; a tribute to Georges Balandier (1920-2016) written by George Steinmetz; a policy brief on the constitutional crisis in Poland by Iga Kozlowska (organized by Natalia Forrat and Jensen Sass); and a list of new publications by section members as well as other news and announcements.