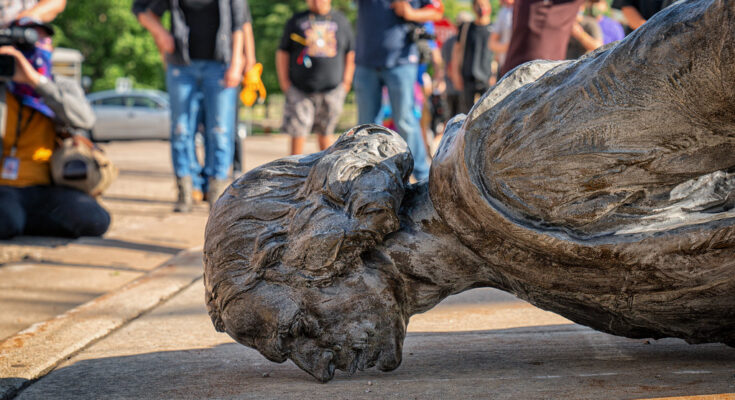 The American Sociological Association’s (ASA) Comparative Historical Sociology (CHS) section has weathered the George Floyd uprising like most other ASA sections: little has changed. Mostly, our predominantly white albeit highly cosmopolitan collective of erudite academicians carried on as usual, with the exception of a statement of support and a symbolic donation to a diversity fellowship. Indeed, we seem to think, little can be expected of us, since we chose to befriend one another and pursue research rather than befriend Jeff Bezos or pursue a progressive legislative career. What power do we have? We have neither plutocracy nor nepotism working in our favor. If we could pull Bezos’s heartstrings or whip Joe Manchin’s vote, the thinking seems to be, we might could do something. But we can’t. Or is it, perhaps, that we won’t?

We have the opportunity to rethink our values, thanks to George Floyd, Breonna Taylor, Ahmaud Arbery, and so many others, and to the millions who marched in the streets that their names not be forgotten, that we dismantle the systematic oppression and violence to which Black people are made to suffer. It would be ironic to say the least if the bastion of progressive social scientists that is CHS weathered the George Floyd uprising with composure intact. More ironic still if NASCAR banned Confederate flags at its races and the conservative American Political Science Association scrubbed “Woodrow Wilson” from the name of its top prize all while CHS sat on its laurels. Unless, of course, CHS is already free of racism.

Where are we with racism?

This question began to percolate in the CHS’s leadership Council several months ago after someone observed that a 14th century scholar penned some politically incorrect lines about Africans’ suitability to slavery. The problem was that the name of that 14th century scholar, Ibn Khaldun, had been affixed to the section’s top prize, the Ibn Khaldun Distinguished Career Award, as a diversity initiative (Ibn Khaldun was born in Tunisia). The storm was perfect: political correctness faced off against diversity. The 1980s clashed with the 2000s, enveloping the section in near-civil war; recently, with dust beginning to settle, talk of post-conflict reconciliation has ensued.

Curiously, the CHS conflict had nothing to do with the conflict Derek Chauvin’s murder of George Floyd triggered in American society. From CHS’s perspective, the latter conflict—leading to a major debate about defunding the police in order to fund human needs and bolstering a growing consensus that those who perpetrated racial violence are unworthy of commemoration—still seemed to be decades in the future. And from a vantagepoint of the 1980s and 2000s, it was in far off 2020.

This historical vertigo might be expected of other sections, where there is no need to be able to distinguish one epoch from another. It is curious coming from CHS. Why not acknowledge that it is neither the 1980s nor the 2000s anymore?

If this were to happen, we would be faced with a question: Will the remaining statues stay up?

In this essay, I critique Theda Skocpol’s theory of social revolution in an effort to convince you that our statues should not stay up. I focus on Skocpol’s theory of revolutions in part because another of CHS’s prizes—the Dissertation Prize—is currently named after Skocpol but could be named otherwise were we to decide to topple our statues. At first sight, Skocpol’s seminal book might appear to be the last place to look for racism. And yet, with scrutiny, I think it becomes clear that the approach it champions is tacitly racist. This conclusion, in turn, is important not as an indictment of Skocpol, but rather because it suggests that the CHS section is not bereft of racism. It suggests that CHS might be racist without there being racists in the section.

My point is not that we should ridicule or exclude people whose social science harbors terrible implications. I don’t mean to say Skocpol herself was or is racist, but instead that the approach she advances is an instance of what we might call methodological racism.[1] If we take racism seriously and tell ourselves that it is structural and practiced rather than necessarily individual much less essential, we must also concede that certain approaches, at least when applied to certain topics, may well harbor racist implications without the authors in question necessarily being racists. The racist implications of Skocpol’s approach stem from the way she severs interrelated phenomena, specifies narrow territorial units, and obscures cascading effects.

Skocpol, to refresh your memory, argues that the French, Russian, and Chinese social revolutions were the product of three variables: diplomatic crisis, rigid agrarian structure, and peasant insurgency. Since these countries were enthralled in crisis due to geopolitical turmoil, the result of peasant insurgency amidst rigid agrarian structure was social revolution. Crucially, peasant insurrections did not result when the middle peasantry was either weak or nonexistent, or when the landed elite exercised little influence over the state, as in England, Japan, and Germany/Prussia—the three “negative” cases in Skocpol’s analysis.

Skocpol’s account became canonical. It continues to be one of the greatest books in the social sciences. And we should definitely still read it. But the book, and by association the paradigm it established, has major problems.

Before Skocpol, the foremost thinking about social revolutions was Marxism. Compared to Skocpol, one of the chief characteristics of the Marxist work is the way it conceptualizes revolution and counterrevolution as a single problem. Marx studied these two faces of social revolution through examination of the French 1848 revolution and its “grotesque” aftermath. W. E. B. DuBois did so by examining both radical reconstruction immediately after the American Civil War and the racist backlash that followed. Leon Trotsky did so via study of the Russian Revolution and its “betrayal.” The focus for all three was on processes which were characterized by revolutionary forces on one side and revanchist reaction on the other.

Against this background, Skocpol represented a paradigm shift. The new paradigm focused on explaining the outbreak of revolution as an outcome, an episodic performance that was a priori deemed substantively important as regards after-effects (that is, social revolutions were defined as significant alterations of the state and the class structure rather than studied to discover how significantly these things changed). This separated the study of revolution from the study of counterrevolution. This separation, in turn, gave the new paradigm racist blinders.

Another key feature of Skocpol’s approach is that it considers countries as isolated cases: it separates national territories from their colonial possessions by methodological fiat. One implication is that Skocpol considers the French case in isolation from its colonial possession Haiti, and thus from the Haitian Revolution—which was in many ways an outgrowth of the French Revolution, one with major implications for racial politics in the 19th and 20th century Americas. The Haitian Revolution not only established the first Black republic in human history. It also fundamentally shaped the region’s history by inspiring other race revolts: e.g., those led by Gabriel Prosser in Virginia in 1800, by Denmark Vesey in South Carolina in 1822, and by Nat Turner in Virginia in 1831.

The Haitian Revolution also shaped the region’s history by striking fear into the hearts of elites—prompting what amounted to the diffusion of preemptive counterrevolution. This fear reverberated down through the decades, steeling the resolve of the Southern slaveocracy prior to and during the American Civil War, thereby helping to shape that revolution and counterrevolution as well. Nor was its influence limited to North America. Thus, when Spain’s grip on Latin America began to unravel during the early-19th century, Peru’s creole elites didn’t fight for a republic. They feared, perhaps accurately, that wartime mobilization would inspire an indigenous revolt similar to the Haitian Revolution—and that this would sweep them from the stage of history. (After other Latin American independence leaders defeated the crown they thrust an unwanted republic upon the Peruvian creole elite.) Skocpol’s failure to appreciate the interplay of revolution and counterrevolution and her unwillingness to acknowledge colonial subjects as revolutionary actors amount to racial blinders.

Skocpol’s approach also separates postrevolutionary governments from their contexts and goals, which were intimately informed by racial domination. The Russian and Chinese social revolutions, after surviving counterrevolution and emerging into a world of colonizer and colonized, gave rise to postrevolutionary regimes. One need not glorify the bureaucratic monstrosity that emerged from the combined forces of foreign invasion and domestic reaction in the case of Russia, nor downplay the missed opportunities to unite workers with peasants or the Communists’ disastrous alliance with “progressive” elites in the case of China, to acknowledge that these governments were major catalysts for nationalist revolts across the colonized world, both directly and indirectly.

Each of these shortcomings stem from Skocpol’s method, according to which revolutions are mere performances, countries are walled-in stages, and we are spectators. These features obscure race: when we see revolutions not as performances but as battles that may be won or lost, we can see that loss may help generate the most gruesome of racist regimes; when we see countries not as isolated stages but as nodes in an interconnected world, we can see them as perpetrators and survivors of colonial subjugation and racial domination; and when we see intellectuals not as spectators who can’t participate because we are neither diplomats nor peasants, but instead as actors, we can see how we might weigh in on historical processes as they unfold. Indeed, we can do this even now by deciding not to continue to idolize, emulate, or praise work with such implications in our section.

Skocpol’s work should be read by all. But as regards the approaches we enthrone, the values implied by those approaches, and the affiliation of prizes with those approaches and values, we should move on. Moreover, if we cease to be spectators, it is possible that our efforts will spread, just as revolutions do. Sparking a revolution would be a noble goal for CHS, something about which we could be proud. For as it stands, even within sociology, other ASA sections continue to have prizes named after racists: the Social Psychology section’s top prize is named after George Herbert Mead, who as Daniel Huebner’s work documents, was a proponent of American colonization of Hawaii. Sociology is not unique among the social sciences, and may even be less terrible than kindred disciplines. But we’re not perfect. We should remove these names from our prizes.

By doing so, perhaps sociology could lead. Perhaps CHS could inspire the social sciences—not least because inspiration is sorely needed. Not long ago, the American Political Science Association gave a prestigious award to David Petraeus. And the namesake of the main fellowship available to fund anthropology graduate students’ fieldwork, Axel Wenner-Grenn, was personal friends with Hermann Göring. Racism runs deep in the social sciences. But it doesn’t have to. One way to break from that past would be to topple the statues. We have nothing to lose but our racism.

Simeon J. Newman is a white, heterosexual male. He was Student Council Representative to CHS during the three years ending in August. His dissertation research is on clientelism in 20th century Latin America.

[1] Nor did Skocpol have much choice but to employ her approach, embattled as she was by naysaying positivists who all but forced her to champion a method and apply it to her topic, presumably without thinking the implications through.

One Comment on “Comparative Historical Sociology, the Denial of Race, and the Naming of Prizes: A Critique of Skocpol’s Theory of Revolutions”