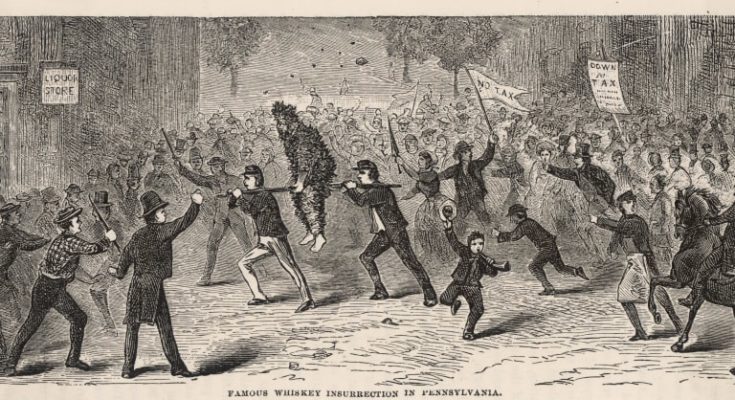 Let’s say you are advising, or writing, a three-case study dissertation. You want the dissertation to be welcome scholarly news. That usually means it makes a causal argument with comparisons. You also are alive to the criticisms of approaches that define comparison cases as collections of factors or variables.

What do you do?  Our paper proposes a novel answer that draws on pragmatist epistemology and social philosophy, and ethnographic research procedures. This short summary focuses on our approach to defining cases, and theorizing and justifying case comparisons, and then ends with the briefest mention of normative criteria in selecting cases. The paper illustrates our approach with Reed’s research on the Salem witch trials and the Whiskey Rebellion in the US.

Historians and ethnographers potentially share an orientation to chains of meaningful action that emerge in relation to problems. Actors conceive, often change, their ends in view depending on their encounters with problems. Chains of action unfold across time and space, crisscrossing between collective and individual actors. Custom, habit, creativity and reflexivity all play a part in the unfolding action. Of the perhaps innumerable chains, which do we choose to interpret? And which do we compare in order to arrive at an interpretive explanation?

We propose that historical sociologists embrace this scenario of action, and we offer a pragmatist approach to the problem of which actions to interpret and compare. It is indebted to John Dewey and his notion of “conduct”—meaning social action that occurs somewhere on the arc between reflexive understanding and habit. Making the historical sociologist an investigator of conduct opens up challenges but also possibilities that we would lose with a current, deservedly prominent approach.

We call that approach “causal combinatorics.” A category of approaches really, it draws on set theory to formalize comparative method in the interest of causal analysis. This line of research includes Qualitative Comparative Analysis, and important work by our fellow panelists. Work in this category uses cases to represent different combinations of elements or factors that do or don’t work, in experimental time, to produce outcomes of interest: fascism or no fascism, for example. The focus is on combinations of qualities or factors, not average effects of linear correlations taken as causes. This approach bids us produce medium-N research design, not small-N. And that’s not a bad way to write a dissertation, or an award-winning mature work!

The causal combinatorics approach has been one of many different approaches to the fine line between history and sociology. Another conversation that has taken place concerning the relationship between history and sociology has been focused on events and temporality. Causal combinatorics itself considered temporality through concepts such as path-dependence and critical events. Others have plied a more interpretive approach, asking how events are cognized as events by the actors involved, while events are happening. For example, Abbott advocates for a concept of duration—referring to an experience of time that is holistic—-using the metaphor of a musical phrase to capture this. In contrast to Abbott, but also outside the causal combinatorics frame, Sewell has advocated “eventful time” in contrast to “experimental time.” In his view, precisely because events transform the basic rules of the game of social life, events also render causality temporally heterogeneous.

For us, the turn to events and temporality has two implications. First, these works invite a larger reorientation toward action, interaction and interpretation as a process. And second, they reintroduce the problem of comparisons in the service of causal analysis—even if Abbott’s perspective seems to shift away from that enterprise. That means we are back to looking for relevant counterfactual cases, since we don’t determine the relevant counterfactuals from a table of factor-combinations (searching the historical record for a given combination). Of course, we could just foreswear comparisons. But do we really tell colleagues and students not to do comparison?

We propose a different justification for comparisons, a pragmatist historical sociology of conduct that imbibes the spirit of ‘taking action on its own terms’ while maintaining the comparative causal enterprise. Let’s come back, then, to a typical three-case study dissertation. In the causal combinatorics mode, each case is a different, independent collection of factors. The investigator supposes these different collections have led to different outcomes of the same class of event–revolution or no revolution, for example.

Our approach defines and relates cases differently. Each case is an end in itself (a problem of interpretive explanation for the investigator). Each is also a means to solving the problem of explanation in the other cases. The investigator defines cases in terms of different sequences of meaningful action — rather than in terms of similar/different outcomes. The investigator conceives the different action sequences as different iterations of a shared conceptual category, not different collections of variables. These mutually informing cases constitute a triangle, a “mini-world” of interpretation and explanation. Our approach involves four aspects: theoretical casing; comparison by way of “theoretical translation”; critical-reflexive judgments by a community of inquiry; and (occasionally) the use of normative counterfactuals.

Casing. For ethnographers, including historical ethnographers (for example, Glaeser, 2011), the challenge is to case the chains of meaningful action in a way that honors and juggles the actors’ meanings and the investigator’s meanings (Lichterman and Reed 2015). We don’t want to uncritically adopt actors’ categories as our own terms of analysis. Yet actors’ meanings of course are integral to meaningful chains of action. We have to ask, as ethnographers do: “What do we have a case of?” In order to case our historical observations on the French Revolution, for example, typically we would draw on theories of revolution and say we have a case of a particular kind of revolution. But a theory of revolution usually is a theory of a class of outcomes; the revolution happens or doesn’t happen, or ends in dictatorship or democracy.

Our method, in contrast, starts with a conceptual casing that admits of meaningful action. We want to have cases of unfolding conduct, and then follow conduct toward eventual outcomes, rather than starting with outcomes—as in a theory of revolution-—and looking back, combing the empirical record with preselected factors taken from theories of revolution. That method usually truncates meaningful action. So we have to tack back and forth between a sociological concept of action and the acts and actors’ meanings we have observed. This is the core hermeneutic process leading to interpretive explanation in historical sociology.

Comparison through theoretical translation. Conceptualization and comparison work together with casing. In our approach, causal claims are contrastive. We ask a “why question”: Why did some series or “duration” of linked actions unfold, instead of a series that could have transpired but didn’t? The comparison cases in our mini-world of investigation are contrasts, just as they are in ethnographic studies that follow analytic induction.  We “translate” cases into theoretical terms that admit of situated action—whether the “situation” is of the sort Goffman studied, or rather Geertz. Reed’s (2016) comparison of the Whiskey Rebellion and the Salem Witch Trials illustrates these first two aspects of our method.

While a rebellion is not a witch-hunt, Reed compared the episodes as cases of a conceptual category: the coherence of an ideological response to “unsettled times.” Reed found in Salem ample evidence of an uncertain situation, in which a group of ministers could use the power of coherent rhetoric to make their interpretation of the situation convincing. The why-question emerged: Why did the Whiskey Rebellion not seem to go this way? The Whiskey rebels had access to a coherent, millenarian worldview, but their speeches and other communications conveyed incoherence, humor, nervousness—not the grinding seriousness of Cotton Mather. Having translated the casing concept across both cases, Reed took the 1692 Salem case as the counterfactual comparison for the 1794 Whiskey Rebellion, and vice versa. Each was cased with the same conceptual category, assisting the other’s ability to address the question of how historical actors render action into a coherent story in times of crisis.

The community of inquiry. Put compactly, both C.S. Peirce and John Dewey argued that adequate knowledge claims emerge only in critical-reflexive dialogue with a community of inquiry that assesses the empirical worth of claims and the claims’ ability to generate further inquiry. Contemporary Deweyan and feminist epistemologists would point out those communities—disciplinary, sub-disciplinary or trans-disciplinary—rest to some degree on conventional relevance criteria for “a good question” or “a good comparison.” These criteria keep the community focused on shared concerns—but may also induce some tunnel vision. Sometimes, the researcher has reason to try reorienting the community’s dominant approaches to its shared research concerns; we call that meta-communicative dialogue. In this case, the community’s concern is how to conceptualize crisis. Is it a historical conjuncture of organizational and institutional dynamics, or a state of feeling that elicits in different actors various kinds of action and uses of culture? Reed’s discussion of thematization and fetishization was an attempt to re-orient some of the community’s dialogue about crisis times. Finally, and very provisionally:

Enter the normative? Communities of inquiry sometimes engage practical or “normative,” questions, as Dewey knew. A classic example is “why no socialism in the US?” Our paper considers the use of comparisons and theoretical translations that derive not only from other chains of historical action, but from normative aspirations about how action could have unfolded.

Consider Du Bois’ Black Reconstruction in America (1935). Du Bois compares the trajectories of the nineteenth century Black and White worker, and in turn makes comparisons with European, especially British working-class politics. He also compared with a normative counterfactual case of “what might have happened.” That was the possibility that proponents of universal suffrage and advocates of subordinated labor could have united in a democratic front to challenge racialized capitalism.  DuBois analyzed incipient efforts to unite white and black workers, actual instances of black suffrage before the end of Reconstruction, as well as the post-civil war political ambitions of abolition advocates.

Our paper discusses how contrasts drawn from normative questions can be subject to the same critical-reflexive scrutiny as other contrasts.  A community that is ready to critically examine cases inspired by normative causal questions, rather than assume those questions aren’t operating, is one that is more ready to identify normative blinders in case and concept selection. Under these conditions, comparisons in the service of normative questions may be generative for future inquiry.

Du Bois, William Edward Burghardt. 1935. Black reconstruction in America: An essay toward a history of the part which black folk played in the attempt to reconstruct democracy in America, 1860-1880. Vol. 6. New York: Oxford University Press.