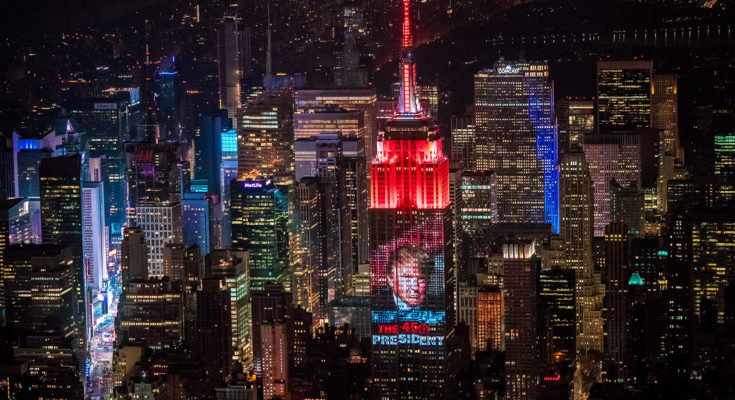 With the end of the Cold War, the U.S. remains the world’s sole global empire. Under the Trump administration, though, the direction of U.S. Empire remains uncertain. Indeed, comparative-historical sociologists might provide much help in making sense of U.S. Empire under Trump. Beyond Trump’s promise to “Make America Great Again,” where is U.S. Empire headed under his direction?

Many have recently entered into discussion of the rise, decline, and persistence of the American Empire. In some respects, it is clearly in decline. There is no doubt that China, Russia, and left-leaning countries throughout Latin America challenge U.S. global power. Chinese purchasing power parity, for instance, recently surpassed that of the U.S., and Chinese exports have long surpassed those of the U.S. as well. These dynamics certainly constrain U.S. power. But thinking about this problem counterfactually, it is clear that they do not determine Trump administration priorities. Neither a Clinton nor a Rubio administration would have pursued the same economic and political priorities as Trump has, such as a tariff war and warmth towards right-wing rulers in places like Hungary, the Philippines, and, of course, Russia.

The Trump administration has had a large influence in terms of steering American Empire in a new direction, at least in the short term. In what follows, I attempt to draw a balance sheet.

To do so, I will draw from Michael Mann’s “IEMP” model–which stands for ideological, economic, military, and political power. Focusing on all of these distinct varieties of power precludes one-sided emphasis of any one facet of power, such as economic power, as with many neo-Marxist theorists of globalization, for example.

I take each of these spheres of power in turn, providing some very brief remarks on the trajectory of each sphere under the Trump administration.

Ideological power has to do with ability to harmonize with, and therefore draw support from, widely-held political beliefs. Insofar as a state wields ideological power effectively, it can persuade people and other states without resorting to the use of coercion. The ideological centerpiece of Trump’s foreign policy approach is the promotion of national sovereignty. In his UN General Assembly address in September 2017, for example, Trump mentioned the words “sovereign” or “sovereignty” 21 times. This ideological approach, though, seems to resonate very little with the rest of the world.

Since Trump entered office, the Pew Research Center has found that global confidence in the U.S. president has diminished from 64% to 22%. Most countries surveyed have even evidenced double-digit declines: Sweden has evidenced an 83-point reduction (93% to 10%), and both the Netherlands and Germany have each witnessed a reduction of 75 points. Throughout 37 countries surveyed, Pew has reported that citizens across the world have more confidence in Angela Merkel (42%), Xi Jinping (28%), and Vladimir Putin (27%) than Trump (22%).

With Trump and U.S. ideological appeal in such disarray, the U.S.’s ability to persuade without resorting to force now remains increasingly restricted.

Michael Mann characterizes economic power as involving control over “the extraction, transformation, distribution, and consumption of objects of nature” (The Sources of Social Power Vol. 1, pages 24-5, 1986). With his policies, Trump is threatening the vitality and interconnectedness of the U.S. economy, particularly with the implementation of tariffs, which indeed particularly threaten the global distribution of U.S. goods and the domestic consumption of products coming into the country.

Trump first signaled his intentions to engage in protectionist and isolationist policies when he condemned free trade agreements, like NAFTA, on the campaign trail. Following his inauguration, he quickly removed the U.S. from Trans-Pacific Partnership (TPP) discussions. In subsequent weeks, Trump imposed tariffs on steel and aluminum imports, and has specifically targeted China with tariffs on $50 billion, and then additional round of $200 billion, worth of goods. The latter $200 billion comes after China retaliated with its own tariffs on U.S. goods, which, interestingly and cleverly, were largely placed on goods coming from parts of the U.S. in which Trump received most electoral support, such as soy, pork, and whiskey.

It is hard to understand who Trump wants to satiate with these protectionist maneuvers. Nearly all analyses predict that they will result in job losses. What is more, Trump’s measures bode to reduce U.S. global influence that emerges from intensified trade relations between countries. For instance, Jonathan Moyer and David Bohl (2018) use the Formal Bilateral Influence Capacity to measure the influence that countries might wield within other countries as a result of trade reliance.[1] As a result of reduced reliance over the next few years, they estimate that the U.S. is posed to lose global influence to China in some 27 countries, including Indonesia, Nigeria, and Thailand. In doing so, China is intensifying its economic relations with countries all throughout the world with its One Belt, One Road initiative, and establishing trade agreements with countries in the wake of TPP’s demise.

If Trump wants to crack down on Chinese economic influence and bolster U.S. economic vitality, it is hard to understand why he is pursuing these measures.

If there is one area involving U.S. global power that Trump has deliberately sought to enhance, it is U.S. military power. Trump requested an historic $700 billion defense budget to update weapons and employ more military personnel. The U.S. already operates over 800 military bases, and enjoys preponderance in land, sea, and air.

At the outset of the Trump presidency, it was not altogether clear if/when Trump would utilize military force. At times, for example, he criticized the U.S. for behaving like “a bully” on the world stage, and he condemned the second Bush administration’s decision to go to war in Iraq. After coming to power, though, Trump has attacked the Syrian government with Tomahawk missiles, removed limitations on military sales to Saudi Arabia and fueled its war in Yemen, and threatened several countries with military force, including Venezuela and North Korea.

If there is any sphere of power in which we can be sure the U.S. will continue to maintain preponderance, it is the military sphere.

There is much to say about U.S. political power at the global level. I will focus on with whom Trump has and has not pursued better relations since coming to power, and how Trump has approached global institutions.

Trump has criticized the European Union–even likening it to an enemy–and he has squabbled with traditional U.S. allies, such as Canada and Germany. And while straining these relations, he has exhibited an unusual warmth towards authoritarian leaders, including Rodrigo Duterte, Viktor Orbán, and Vladmir Putin, with whom Trump recently met in Finland and invited to the White House. There is much speculation concerning why Trump gravitates towards these leaders. A fuller analysis of these dynamics is beyond the scope of this piece. But suffice it to observe that Trump seemingly possesses similar authoritarian inclinations, exhibited when he responds to public criticism harshly, perhaps attributable to his professional life within the corporate sector where the boss is dictator (do not forget Trump’s most famous line: “You’re fired!”).

Trump also exhibits antipathy towards many of the multilateral institutions that were initially developed in the wake World War II in order, some argue, to safeguard the world against another authoritarian superpower like fascist Germany. Trump has criticized the UN and many of its recent initiatives such as the Paris Climate Accords; questioned U.S. involvement in NATO; and threatened the leave the World Trade Organization. As a result, Trump seemingly wants to return to the pre-World War II atmosphere of national sovereignty and all-out unilateralism.

In the short-term, the Trump administration’s behavior points to an overall reduction in U.S. global power. And it’s puzzling. In recent years, we have seen no other presidential candidate quite so vehemently champion nationalism much less champion turning the country from a set of “losers” into “winners.” But, if anything, this was Trump’s promise in his slogan of “Make America Great Again.”

It is well to take issue with the goal. But it is also important to assess the means Trump has for achieving it.

Trump ran for president on his business acumen, but his economic policies seem deliberately designed to damage the U.S. economy. Trump said he wanted to restore the stature of the U.S. abroad, but we have witnessed numerous allies take issue with the administration and openly criticize Trump. And while Trump has cozied up to authoritarian leaders such as Kim Jong-Un and Vladimir Putin, these efforts towards rapprochement have, at this point, borne little fruit. If anything, these efforts have delegitimated the government and provided optics in which the U.S. appears unable to successfully leverage global challengers. Indeed, at the global level, the Trump administration has few accomplishments to show for itself for over a year and a half in office.

In the short-term, of the four spheres of power discussed above, the Trump administration is only poised to enhance U.S. military power. Long-term predictions are beyond the scope of this piece, but should the U.S. become a country resting on military might alone, others will replace the U.S. in the ideological, economic, and political spheres of power. What is more, this may allow other powerful actors to eventually challenge U.S. military might, by, for example, leveraging economic power to get host countries to close U.S. military bases or limiting military exercises, or by challenging it even more directly than what we have recently witnessed from Russia in Eastern Europe.

There are surely facets of U.S. Empire that demand interrogation. Trump, however, insists on exploding many of those dimensions that remain least nefarious: ideological sway as a result of liberal democratic pursuits, leadership in multilateral institutions, and economic interconnectedness.

In the end, Trump seems to believe that the U.S. Empire can run on military force and tough posturing alone. Such military overreach may well spawn global resentments that emerge alongside these dynamics.

Timothy M. Gill is assistant professor of sociology at the University of North Carolina-Wilmington. His research focuses on the role of the U.S. empire in Latin America, particularly U.S. democracy promotion efforts in Socialist Venezuela.