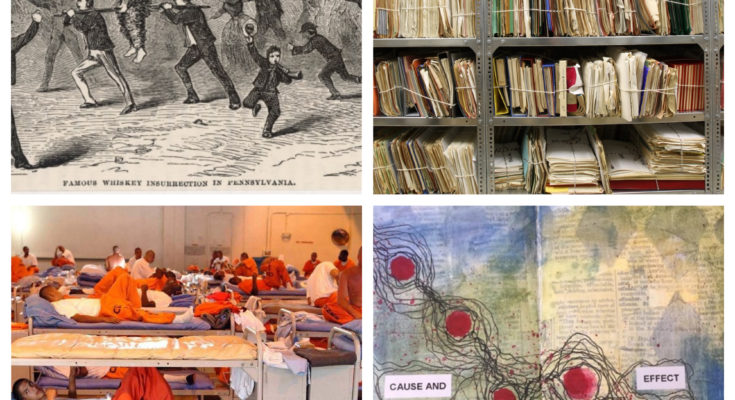 We have four outstanding papers here, two tackling archival issues and two tackling causal issues. Anna Skarpelis and Armando Lara-Millan, Brian Sargent, and Sunmin Kim are all advocating for a more thoughtful approach to archival research. Interestingly, Skarpelis suggests stepping outside of the archive to map its structure whereas Lara Millan, Sargent, and Kim suggest immersing and indeed losing oneself in the archives in a sort of directionless way to pull out some of its hidden structures. Similarly, Laura García-Montoya & Jim Mahoney are in tension with Isaac Reed & Paul Lichterman, where one team calls for focus on events and the other on dissolving events into linked chains of meaning and conduct. Both, however, converge in situating their conversation around counterfactual causal reasoning and in focusing on the drivers of action rather than the outcomes, which I think is interesting as well as potentially problematic.

Let me begin with the archivists. Skarpelis has a very interesting and eminently readable paper. She refers to the subfield of “computational historical sociology”, which I’m going to say is possibly overstating things but I am happy to see this term in circulation and hope it gains traction. She makes many excellent points, but there are three areas where I would raise questions.

There is a potential conflation here between the archives and the state, which makes for a particularly dark view of archives. Anna’s cases are two fascist states, so I can see how she arrived here. But many archives are not state products. Company archives, merchant archives, market records, letters, museum collections, the list goes on and on. In many of these the structural is incidental to what the people were trying to accomplish, accidental and much less insidious than the power of records of activity in a fascist state. But also very important. Second, Skarpelis writes of the inevitability of the archival process turning a person into record. Again, I will say this is not the case in many non-state archives, which record transactions. Indeed, there is an argument to be made that most archives record interactions and transactions, not people. But again, this may be about different types of archives. And third, there is Borgesian tension in the argument, which calls for a careful reconstruction of the history of archives in order to fully understand their documents. Essentially you need an archive for the archive. To me this suggests not that this is an impossible task, but that the best way to conduct historical research is to combine archives. I wonder if Skarpelis would agree that this is consistent with her argument and an effective approach.

A different tack is suggested in Lara-Millan, Sargent, and Kim’s thoughtful paper about the ethnographic imagination in archival research. I like the idea of losing oneself in the archives, and agree alongside luminaries like Charles Peirce and Guy Debord, that this is an intuition building strategy. But there is a danger here. Is a detailed description of events always good? Do we always want to see from the eyes of one person. What we might lose is the systematic and comparative perspective. We are scholars, and I think the end goal is not only to understand why people made the choices they did. It is also to understand how certain outcomes were produced. We want to know more than the people. We want to see for example how opportunities constrain action, how interdependencies in decision-making produce unexpected outcomes, and how long-term structural processes can explode into visibility in sudden events.

Garcia-Montoya & Mahoney share with Lara-Millan, Sargent, and Kim. a focus on contingency, so let me then ask both what if these contingent events are just moments of visibility for temporally unfolding structural conditions, in the way that revolution can be tied to demographic change? I also worry that the emphasis on truly contingent events may give you the least predictive power of all approaches. If an event is truly unusual, it is not likely to occur again, so then our theories aren’t very powerful.

But accepting that there is a benefit to identifying these significant events. I think there still maybe issues that are difficult to work out. What parts of an event are important? How you do case an event? Does it matter that there is an election or is it more important that the election was between Bush and Gore? If it is about estimating the causal effect of Bush and Gore running against each other with Ralph Nader as a 3rd party contender, then what is the value of that for understanding future elections. I am also very unsure as to how I can estimate the probability of events that don’t happen. And finally, I wonder about the choice of elections as an example. Elections are a highly structured moment of contingency. They are designed that way. How useful is this approach for less structured and contingent moments?

Isaac Reed and Paul Lichterman are also concerned with causal analysis and make a compelling case for investigating “actively constructed cases to compare different chains of meaningful action that theoretical categories make comparable.” The idea here is to focus on similar patterns of conduct and their outcomes rather than picking chains of action that are tied to some particular outcome. My first question, is how different is this from that refrain we all got drilled into us in graduate school: don’t select on the independent variable. Does study of collective action accomplish this approach to situated chains of meaning and conduct? It seems to satisfy some of the conditions.

The paper raises very serious and under-thought issues: Can settings be variables? Can structures be agents? Are forms different from contents? And importantly, are we doing damage to our explanations by swapping out these fundamentally different types of objects and inserting them into the same causal models. It is terrific to progress being made on these issues. But I wonder if meta communication is going to provide an answer. In the end metacommunication in the sciences failed Du Bois, but sustained Dewey and James. How can we make it better?

In conclusion, while I think this each of these papers makes important contributions, the common thread running throughout may be an animosity to outcomes and an emphasis on contingency. I find this concerning. Now more than ever, don’t we want research that helps us solve particular problems?