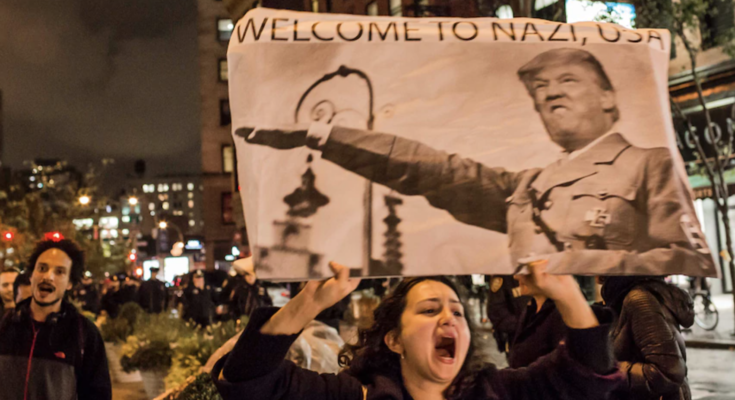 In late 2016 in response to the widespread media narrative that linked Trump to Brexit and an array of European populists, I wrote a short essay entitled, “Trump isn’t a European-style populist: That’s our problem”, in which I argued that the comparison between Trump and his supposed European counterparts was flawed. For the most part, European populists are career politicians who deploy a standard nationalist script to address any number of political issues. Their predictability as well as commitment to their national political institutions was their strength as well as their weakness. In contrast, Trump questioned the legitimacy of political institutions from the courts to the electoral system and denied the reality of facts. The essay concluded that Trump’s unpredictability made him “profoundly dangerous” and pointed to a rocky road ahead for American democracy.

I did not imagine back then that “dangerous” would take the form of Trump’s refusal to accept the results of the 2020 Presidential election. I did not imagine an attack on the US Capitol building engineered from inside the White House that included the possible assassination of the Vice President. I envisioned milder transgressions than the ones that culminated in the failed coup of January 6. As Trump’s behavior became increasingly contemptuous of democratic practice and norms and his rhetoric more inflamed, the populist comparison lost salience. In its place, a growth industry in public commentary on fascism developed. Academics (for example, Snyder 2017; Stanley 2018; Finchelstein 2020; Ben- Ghiat 2020; Churchwell 2020) as well as public intellectuals became laser focused on Trump’s resemblance to a host of past and present unsavory political leaders with a weak attachment to democracy. In addition to analytic commentary, politicians and pundits deployed fascism as a political expletive. For example, after her speech at the Democratic National Convention, New York Congressperson Alexandria Ocasio-Cortez argued that “stopping fascism in the United States. That is what Donald Trump represents” was the major point on the national political agenda.

Did Trump’s challenge to the 2020 election results and the willingness of his strongest followers not only to support this challenge but to commit seditious actions in support of them signal a fascist turn in American politics or merely an outlier event tied to Trump? Today, sequestered in Mar-a-Lago with loyalists and family around him, Trump appears to spend his time playing golf and plotting against Republican legislators who voted to impeach him. He no longer tweets about voter fraud because social media sites have banned him. Yet, his rambling two-hour CPAC speech on February 28 indicates that Trump has not given up on the “stolen election” lie or the dream of seeking office again. Trump’s apparent unwillingness to leave the public stage suggests that now is a propitious moment to ask if fascism is the correct focus to understand the political meaning and consequences of the last four years.

In Making the Fascist Self (Berezin 1997), I argued that Italian fascism was more than the sum of its numerous public spectacles. There are lessons from this European past. As comparative historical sociologists, it is our job to figure out which lessons are meaningful.

Fascism in its national variations is notoriously difficult to define, making it susceptible to epistemic plasticity. As a concept, fascism tends to act as a “bridging metaphor” (Alexander 2003) for evil, violence and authoritarian behavior—whether it be political, cultural or social. Fascism is “fascinating” as Susan Sontag observed and recent historyconfirms. Trump’s permanent campaign mode, his MAGA rallies and his complete disregard for governmental norms and practices evoke multiple dimensions of inter-war fascist politics and practice. The academic experts who have explored the similarities between Trumpian politics and the 1930s readily acknowledge that whatever Trump’s autocratic proclivities, we do not have a Fascist regime—the events of January 6 notwithstanding.

Benito Mussolini coined the term fascism to denote a collectivist system of government. Giovanni Gentile, an Italian philosopher and Mussolini’s Minister of Education, laid out the details for this new theory in an academic article in Foreign Affairs (1928). Fascism aspired to community and coherence—to eliminating the boundary between the state and the individual. Liberalism with its soulless individualism was as much its enemy as Marxism. Trumpism with its affinity for isolationism, free trade, and antipathy to government regulation makes no common cause with collectivisms—no matter what form they take.

Trump is a showman–not a talented politician. Any astute politician—especially an aspiring autocrat, should have recognized the opportunity for power consolidation and electoral success that the COVID-19 pandemic afforded. The virus was democratic. Everyone was at risk. Even a half-hearted attempt to control the virus in March would have whittled away, if not erased, Biden’s margin of victory. Trump’s own pollster told him that citizens’ primary interest was the virus and urged Trump to focus his campaign energies there (Dawsey 2021). Trump did not listen. Trump turned a vehicle of political unification into one of polarization. His initial denial, rants against science and the “China” virus, and pitting states against states eventually assured his electoral defeat.

Dead loved ones coupled with lost wages proved more politically persuasive than angry tweets and MAGA rallies. Biden got this point. His inaugural team recognized the opportunity that COVID-19 offered to stage a public display of national cohesion to counter the polarization that plagued American politics for the last four years. On the eve of Biden’s inauguration, buildings in D.C. were lit to commemorate the lives lost to COVID-19. Biden and Harris and their spouses stood at the Washington Monument to participate in a moment of silence. At 5:30 pm, all Americans had the opportunity to participate in a moment of silence across the United States and church bells rang in ‘a national moment of unity andremembrance’ to commemorate the dead. Political ritual unifies as well as repels. The Tuesday evening commemoration unified, in contrast to the Jan. 6 insurrection that repelled. Biden and his team staged a political spectacle of unity. They understood that grief and tears are more powerful than the spectacle of disruption, anger and blood. In short, the period between November 6 and January 20 revealed that Trump lost on multiple levels while still managing to do much damage during his four years in office.

The debate over whether or not Trump is a fascist rings alarm bells but hides more than it reveals about the illiberal tendencies in contemporary American politics. Trump’s Presidency and the 2020 election is a Rorschach test that reveals all the fissures embedded in the landscape of American democracy.

First, our institutions held—but often, barely. The last four years have shown how elastic they are. Who knew that the head of the General Services Administration had the power to hold up a Presidential transition or that the operations of the post-office could interfere with ballots? If Trump had been a slightly more rational person, how far could William Barr have pushed his vision of the unitary executive? Second, Trump encouraged and gave new legitimacy to networks of paramilitary “patriots” who use armed intervention and violence in local and national politics when they dislike the outcome of standard political practices. Paramilitary groups are not new. They have existed on the margins and in rural areas. Trump invited them in and they will not leave as he did. Today a group of Proud Boys is as likely to show up on the steps of state capitols as they recently did in Oregon, as in some minor protest in a rural backwater. Charlottesville was the beginning, not the end, of a new genre of organized racism.

Third, the developing idea that we dodged a bullet this time but there is a smarter more efficient Trump on the horizon has traction. Josh Hawley, the conservative Republican senator from Missouri, was the name that frequently came up on Trump 2.0 lists until he tried to stop the certification of the election results on January 6. But this is an open question. Hawley has not disappeared and there surely are other Hawleys out there.

To begin an analysis of Trump that extends beyond the cult of personality we have only to look at the 2021 Conservative Political Action Conference [CPAC]. Founded in 1974, Ronald Reagan was its first keynote speaker. CPAC is the voice of America’s ultraconservative Republicans. In 2021, Donald Trump was the keynote speaker for a conference whose themewas “American Uncancelled.” Three days of Trump adoration led up to the former President’s keynote address. No one at CPAC seemed to mind that Trump had asked followers to invade the United States’ Capitol a mere month before or that he was under investigation for all sorts of business fraud in the Southern District Court of New York. The principal takeaway from Trump’s talk was that he was not abandoning his claim that the election was stolen from him. Claiming that “we won in a landslide,” Trump questioned the integrity of the Supreme Court that did not have the “guts to challenge” the election results. A second point was that Trump defined Trumpism as “great deals.” The straw poll taken before Trump’s speech revealed that 62% of CPAC attendees saw election integrity as a major issue; 97%liked Trump’s policy agenda; and 68% would be happy to see Trump as a candidate again.

Historian and legal scholar Samuel Moyn’s New York Review article, “The Trouble with Comparisons” (2020) argues that locating Trump’s election in the politics of the 1930s obscures more than it reveals and deflects public attention from our real problems. I too have questioned the analytic utility of the term fascism (Berezin 2019) to address our current moment. Yet, that does not mean we should be complacent. If Europe in the 1930s is not the best comparison point for the United States today, then we have to take on the challenging question of what an appropriate comparison would be. In contrast to the United States today, democracy was not deeply rooted in the countries that succumbed to fascist rule in the past. Trump and Trumpism has revealed a willingness on the part of leaders and citizens to chip away at the institutions, norms and values of our long established, if sometimes flawed, democracy. Trump told us that democracy did not matter and 74 million persons, not all of whom were fledgling fascists, were not sufficiently concerned to vote against him.

The failure to value democracy rather than the desire to embrace fascism is the greatest danger that Trump posed and continues to pose. The consequences of this undervaluation are ongoing. European fascism ended badly for all. Biden’s administration should give priority to the restoration of the belief in civic virtue and practice that affirms democracy in all its iterations as our core value. As comparative historical sociologists and citizens, we need to look for the correct comparisons. Our future as a democracy depends as much on our academic work as our public political practices.