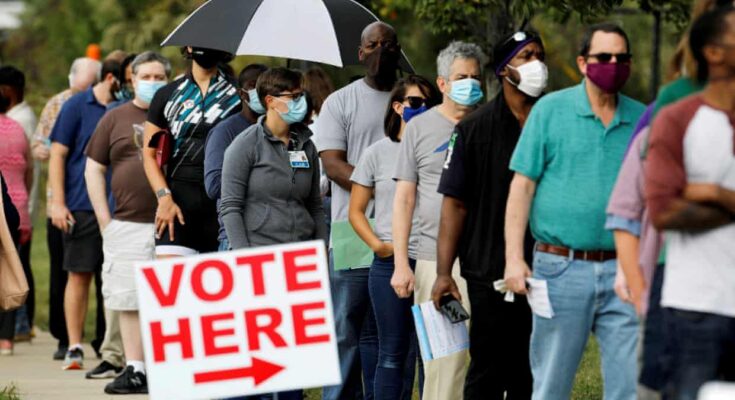 If we are willing to set aside the truly horrifying circumstances surrounding the 2020 election from beginning to end—a big ask—and focus on certain selected facts, one could dare to argue that U.S. democracy is alive and kicking. After decades of alienation and demobilization up until 2008, voter turnout as a percentage of the voting-eligible population in 2020 exceeded 66%—a rate unseen since the turn of the 20th Century. Voter turnout increased in every state in the country, according to Pew Charitable Trusts. Early voting among younger-generation Latinx voters increased by more than 300% relative to 2016. Numbers aren’t in on Black voter turnout, but all signs point to unusually high figures on that front, too. Big tech firms began to show some glimmers, long overdue, of a sense of democratic and civic responsibility—even if it meant taking measures that work against their bottom line. The 117th Congress, record-breaking in many respects, features an all-time high of 141 women members (26.4%) and more racial/ethnic diversity than any Congress in history. And despite an unprecedented assault on the integrity of democratic institutions led by the President himself, those institutions by and large withstood the test—for now.

Yes, I know. What about the horrors of January 6th? What about the fact that 46.8% of votes— more than 74 million—were cast for a President that trafficked in racism, anti-science, xenophobia and corruption, and who may well run again in 2024? And then there are the 33 states that have, since the 2020 election, introduced a whopping 165 bills aimed at restricting the vote, not to mention the heart- sinking tidbits that appear on our social media feeds like regressive and anti-democratic homeschooling and images of a militarized Capitol on-guard against deepening far-right and white supremacist threats.

Often times the term “polarization” refers to partisan rancor and the increasingly vast divide between red and blue. But I would argue that we should think about polarization in a much broader way—what we might term a polarization of possible futures. Depending on where we look, how we think and where we get our news, the political present may look like a regressive hellscape of racist autocratic backsliding or the emerging terrain of a new era of democratic forward progress—one in which younger generations and historically marginalized groups lead the way.

Indeed, for each of the horrors outlined above, there are important counterpoints (with the exception of January 6 , which has no silver lining). Biden is neither populist, nor charismatic, nor especially progressive, and yet he won against a populist rival with a deeply loyal base by a margin that, for some, qualifies as a “landslide victory”—one that featured impressive historical achievements, including the flipping of Georgia to the Democratic column for the first time since 1992. For every bill out there aimed at restricting voting access (across 33 states), there are at least three other bills aimed at expanding access (across 37 states). For every image of homeschooling as a hotbed of anti-democratic, anti-feminist conservatism there is counter-imagery of a generation of homeschooled graduates who actively uphold democratic and civic virtues. Meanwhile, as committed fiscal conservatives are increasingly marginalized in a Trumpifying Republican Party and (some) Democrats seem ready, finally, to return to an embrace of proactive spending initiatives, the age of austerity—and the obscenely winner-take-all economy that was its complement—is losing its grip. The notion that caring for a family isn’t real work worthy of pay seems to be on its way out. Some corporations and foundations that have never been especially well-known for their progressive radicalism are changing their tune on the urgency of climate change and are funding academics—even sociologists!—to counter and reverse neoliberal logic.

If we take all that in, it starts to seem that the most striking thing about the 2020 election, the lead-up to it, and experience since is not that they decisively showed where we’re headed, but rather that they unveiled a range of future pathways that is more wide-open now than during any time in living memory. Historical sociologists might even conclude that we’relooking at a turning point the likes of which hasn’t been seen in generations, comparable more to the 1930s than the 1960s.

How do we know which of our polarized futures is most likely? That’s not a question I think we can answer right now. But I do think that if we take in the whole political landscape, rather than viewing it from within our political and media bubbles, the picture is not as grim as some would have it. Much depends on dynamics within the parties: how far the Trumpification of the Republican Party progresses, what that does to Republican electoral prospects in the longer term, and whether Trumpification finally drives Republicanism into the anti-democratic cul-de- sac that now seems to be its logical end-point; on the Democratic side, the question of whether the fragile truce between its youth-dominated“progressive” wings and the party’s more senior ranks of moderates and Clinton-era holdovers can hold is crucial, as is the question of whether Democrats’ slight—probably temporary— Congressional advantage will translate into meaningful institutional shifts toward securing voting access, reversing racial injustice, bolstering organized labor and improving the economic situations and prospects of the long- suffering U.S. working and middle classes.

On these last questions, as someone who has spent a lot of time thinking about how the ostensible late-twentieth-century victory of democratic capitalism became, in practice, a victory of capitalism over democracy—in social democratic and center-left hands, no less—I wouldn’t say recent history gives us a lot of reasons to be optimistic. The argument that I settled on, in a nutshell, was that politicians, like the rest of us, act on the world on the basis of how they understand it, and by the later twentieth century dominant factions among “progressives” and “social democrats” understood the world in terms of what markets’ interests would allow, which helps to explain why the once-optimistic era of the “third way” now looks like the widespread self-sabotage of center-left parties. In the U.S. case, did this have to do with the increasingly detached, elite- dominated, money-driven world of electoral politics? Yes, surely—but the U.S. political class has always been elite-dominated, and yet there was a time when many of its members thought in very different terms. Were market- centered worldviews mere recognition of financializing economic realities? Sure, to some extent—but let’s remember that political elites of many partisan stripes helped to usher that reality in; they were not merely bystanders. In other words, we could make the argument that the beliefs came first and the reality followed.

If this analysis is right, the question is how dominant figures inside Democratic networks ‘see’—and especially how they understand the horizons of the economically possible in the COVID context and (hopefully) post-COVID future. And here I am very cautiously optimistic—not because I have much faith in Democratic Party elites, but because the avenues into those networks seem to have opened up and multiplied in recent years. To the extent this continues to push out the boundaries of the possible in new progressive directions, the better our possible futures look in otherwise dark times.

This essay is published at TRAJECTORIES (Spring 2021 – Special Issue)